If you were listening to BBC Radio 4 health program tonight (30/6/15) they covered Homocysteine and heart disease. Bottom line seems to be that some time ago research showed that people with a genetic disposition to elevated Homocysteine had a far greater incidence of heart disease leading to the theory that elevated Homnocystiene is a cause. A large trial was then conducted which failed to find this connection and this split the scientific community. However a more recent very large Chinese research project did show a direct relationship between elevated Homocysteine and heart disease and furthermore offered a possible explanation for the failed earlier test. The Chinese subjects who had their homocysteine lowered and as a result reduced their incidence of heart disease were NOT on aspirin. This was unlike the previous failed test in which subjects were using aspirin. It is thought that aspirin masked the benefit of the lowering of Homocystiene.

So what does this mean for us. Well personally I would get my Homocysteine levels checked (I have actually) and if they are too high dont worry, they can be lowered quite easily with a mixture of B vitamins and Folate. A mixture of B12 B6 Folate and Niacin will do the trick (it has for me). For best results I used the Methocobalamin variety, see my earlier blog post on Homocysteine.

” I point out that the increased human consumption of synthetic pyridoxine (B6) may account for the decline in cardiovascular mortality in the US since the 1960s. Both synthetic pyridoxine and folic acid began to be added to the US food supply in appreciable quantities in the 1960s and 1970s in the form of fortified breakfast cereals and vitamin supplements. Since the 1960s there has been a steady decline in cardiovascular mortality of approximately 1% per year in the US, which can only be explained by B6 and folate fortification of the food supply. In a recent news report, epidemiologists from the CDC reported in the recent 2004 Cardiology meeting in San Francisco that the annual decline in mortality from heart disease and stroke suddenly increased in 1998 to 5% per year, as judged by review of death certificates, accounting for about 48,000 fewer deaths per year since 1998. That was the year when folate fortification of flour and refined grain products in the US was mandated by the FDA. The investigators attributed this dramatic reduction in mortality to the effect of folate on lowering homocysteine levels in the population. This effect agrees well with the observed 20% reduction in incidence of neural tube defects in the US population since 1998, when folate was introduced into the US food supply. Studies by the Framingham Heart Study showed that folic acid fortification of refined grain foods in the US in 1998 caused a doubling of blood folate levels and a 15% reduction in blood homocysteine levels in elderly study participants. It seems to me that these observations support the validity of the homocysteine theory of arteriosclerosis in the population at risk.”

The remarkable thing about this picture is the guy on the left. He is 81 years old and we have just completed a one hour off road bike ride to Casa Velha in Portugal. After a spot of light lunch we then ride one hour back to our starting point. The temperature that day was not too hot at 25 centigrade which would not trouble Roy too much as the longest ride he and his wife Hazel take is 1.5 hours out with the same time to return from Fuseta. 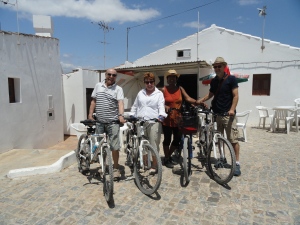 So what is Roy’s secret you may ask. I have probed his lifestyle a little and two things stand out for me. The first is that his body weight has not varied by more than 7lbs since his twenties and the second is that although his diet is pretty good he has, in addition, been a lifelong nibbler of raw nuts.
Research is showing that nut consumers do have much better life outcomes than those that don’t consume nuts.

One large-scale, 30-year long Harvard study found that people who ate a small handful (approximately one ounce or 28 grams) of nuts seven times per week or more were 20 percent less likely to die for any reason, compared to those who avoided nuts.

Those who eat nuts on a regular basis also tend to have lower systolic blood pressure and are less likely to have risk factors for metabolic syndrome, such as low HDL cholesterol, abdominal obesity, and high fasting glucose.2

It’s not surprising then that nut consumption has been linked to cardiovascular health and a lower risk for diabetes. One possible explanation for this is that nuts, especially Almonds and Walnuts are a good source of L-Arganine an amino acid that promotes the production of Nitric Oxide which in turn is responsible for keeping arteries flexible. Nuts also have good Magnesium content. Dr Steven Masley tracked his patients and found that the two most powerful inputs to regressing plaque were fiber and magnesium. You can watch his interview with Dr Dean Ornish here

Nuts also were shown to lower weight when two groups consumed the same amount of calories but one group made up some of their calories with nuts. At first this seems rather puzzling as the calorie intake was the same but we now know that the composition of nuts means they do not give up their calories in the human digestive system to the full extent, in fact only about 40% of the fat is released. This means they satisfy your appetite but calorie for calorie they do not increase your weight as much as other nibbles.

The good news therefore is if you are a between meal nibbler like me or like to crunch on something whilst watching a film then yes give up the crisps, cakes and bread but do not give up the nibbling, simply replace with almonds, cashew nuts and Brazil nuts. Cannot guarantee that it will improve your cycling however.

The two part Australian documentary in which the second part takes a look at Statin therapy has been pulled from the TV channels web site and from Youtube. The pressure from powerful drug companies was it seems too great. You can still catch both parts via this link and its worth watching if you are concerned about Cholesterol levels and Satins

Also Dr Kendricks presentation is a must see where he looks at 10 myths surrounding heart disease and also talks about how many research findings that threaten drug company profits are never allowed to be published in main medical journals.

I have mentioned previously that around 50% of heart attack patients have normal LDL levels which suggests that tracking your LDL levels alone is not a very reliable way of predicting your risk. Current research suggests that LDL particle size (see previous blog entry) and the amount of oxidised LDL you have offer greater predictive value. Oxidised LDL particularly when they become attached or embedded in the arterial wall are the root cause of plaque build up.

Just over a week ago I decided to go for a private oxidised LDL test. I have given up on asking my GP about these things mainly because when I previously asked him about LDL particle size he had not got a clue what I was talking about. I had to explain to him the principles of LDL particles size and the relevance to heart disease. It may be that he is just too busy to keep up with current ideas but I suspect that the information funnel he is sat under is closely controlled by the drug companies. Research findings that endorse the value of say Statins will be on his desk promptly on a Monday morning but ask him about Homocysteine and the use of simple old Vitamin B12 and you are more likely to get a blank expression.

I had my oxidised LDL test done through my usual source BlueHorizon blood tests. It involved a trip to a blood sampling lab near Harley street in London. the trip from the Midlands was wonderfully smooth on a warm sunny day last week. From the Midlands I caught a train at 11.30am and I was back in the Midlands at 3.30pm after a quick lunch in London. The blood clinic was just around the corner from the Oxford Street tube station. BlueHorizons were offering a number of free extra blood tests as an incentive so I opted to have my Zinc levels tested as well as a freebie.

The results came back today quicker than expected and my Oxidised LDL came in at 57.5 ng/ml which is well below the threshold of 170 and perfectly normal. My Zinc levels came in at 16 umol which is again good as the acceptable range is 11 – 18.  These are two tests that I probably wont repeat too frequently as its quite likely that my current diet and life style is capable of managing these readings into the future.

I am not an advocate of the needless lowering of LDL levels when other more informative markers may all be in the safe zone but I can report that 1 week of Niacin (Vit B3) full flush and a modest 50mg dose has lowered my LDL from 3.05 to 2.78 whilst maintaining my HDL at 2.0. I have not encountered any of the flush sensation (maybe I am scizophrenic) and it may well be that people with higher LDL will experience a greater reduction as they may also do if they up the dosage from this modest level. The good news is you do not get the side effects of Statins. There is an excellent book called Niacin The Real Story by Abram Hoffer. The brand I have been using (no connection) is

Studies done on Niacin which have not involved the simultaneous use of statins have shown cardio vascular benefits of Niacin even in secondary prevention.

Also Niacin has been shown to lower LDL P